Here it is, in all its wrinkly glory (needs a good pressing): 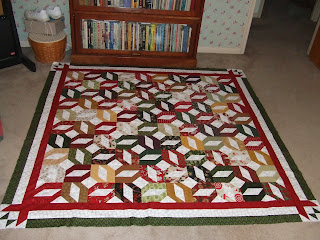 I like the border and the way the red stripes look like ribbons, but the border colors are reminding me of the Italian flag.  Perhaps I should call the quilt "Buon Natale"?
Posted by The Calico Quilter at 5:48 PM 2 comments:

Kim Brackett's pattern called Picnic, that is.  Since I finished that Storm at Sea quilt top I have been wanting to try another allover design and this one appealed to me.  I also had a bunch of Christmas fabric scraps to use.  Here are the blocks so far: 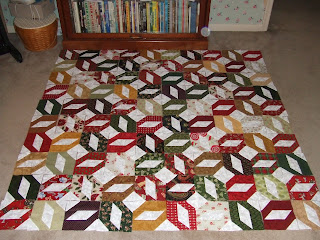 This pattern is definitely well named as it applies to ease of construction because the blocks practically fell together.  Cutting out the patches was also simple.  It is so easy that I would be tempted to make another one.

The published pattern does not have a border but I am tempted to add one.  Here's my idea from EQ: 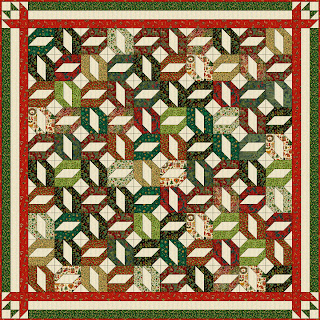 Or should I leave it borderless like the pattern?  Either way it's not very big - 60" square without a border and 72" with one.  By the time I have the rows joined I'll decide.
Posted by The Calico Quilter at 11:46 PM 2 comments:

OK, I'm in a quandary again.  I'm making blocks for a Blue Ridge Beauty quilt and have two possible settings.  There's the one in Bonnie Hunter's book: 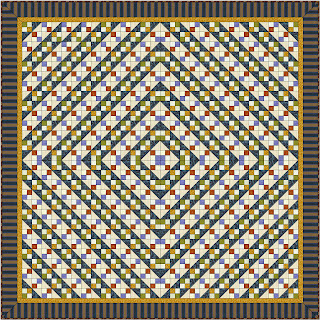 and then there's this variation: 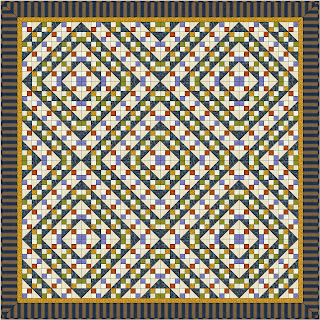 I was planning to make it just like the book but recently finished a quilt that has a lot in common with Bonnie's original design (this quilt, from a kit by Connecting Threads, is folded in quarters, but you get the picture;  it's symmetrical in both directions.): 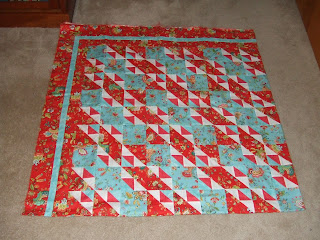 The blocks in the Connecting Threads quilt make a large X instead of a big square on point, but the impact is the same - the units form one shape versus several smaller shapes across the quilt top.  I think I'm also inspired by the Storm at Sea quilt, which has a smaller allover pattern.

Has anyone made a Blue Ridge Beauty and varied the layout like this?

Addendum:  I had another idea: 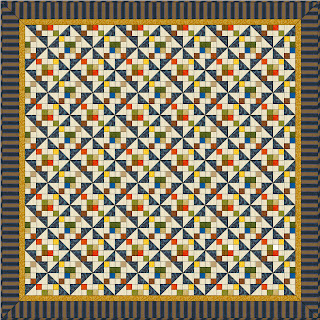 but, husband likes the diamond pattern better.  Guess my decision is made.
Posted by The Calico Quilter at 10:47 AM 2 comments:

"Self tracking" or self absorbed?

Sometimes I hear stories on NPR that leave me frozen in place with my jaw dropped in amazement.  This is one of them:

The "Self Tracking" movement allows you to quantify and chart everything about yourself and what you do.  How many steps do you take daily, how much REM sleep, how many calories burned, when are your most productive hours, how many phone calls do you make each day, how does your mood fluctuate, what is your heart rate - you name it, you can track it.  It gets even more invasive with companies which are handily providing blood tests on self-supplied samples.  Doctor, schmoctor, who needs him?

It's beyond creepy.  "Know thyself", indeed.

This is what happens when narcisicism and obsessive-compulsive disorder mix
Posted by The Calico Quilter at 10:08 AM 3 comments:

Buy the book.  Used bookstore had a replacement.

Find the book.  Right under my nose.

Yep.  That's what I did.  Anybody want a quilt book?

I think I'm going to give it as a Christmas present to a relative.
Posted by The Calico Quilter at 10:57 AM 2 comments:

While I was finishing all my UFOs I remembered a Storm at Sea quilt that was started so long ago that I can't even remember the date.  It was after I moved into this house, so after 1993, but long before I got my Juki sewing machine in 2001.  I think the diamonds were cut out using templates so it predates my serious entry into the rotary revolution.  I'm guessing early 1995.  The fabrics support this because they are in large part very early 1800's reproductions and plaids, and I remember buying what we now call layer cakes of both, 10" square collections, around that time.  The light background fabrics contain Thimbleberries prints and I was making a lot of Thimbleberries quilts back then too.  So, spring of 1995 at the latest.

That makes the project 18 years old.

(Is there a prize for oldest UFO?)

Anyway - I remember moving this project when I sorted or relocated my stash closet, first in a cardboard box, then in a zippered plastic cube from the purchase of some sheets, and finally in a plastic storage bin neatly labeled.  I didn't remember how much I had done or even if all of it was there so last year I got the box down, sorted and counted the patches and bagged them by category.  I had made all the square in a square blocks but not the diamond in a rectangle sashing blocks.

Two nights ago just as I was drifting asleep I thought about the Storm at Sea quilt again and resolved to dig it out in the morning, which I did.   It looked scrappy and promising so it became my next piecing project.  I marked the seam intersections on all the diamond sashing block corners and sewed the lot of them, 60 in total, finishing this morning.  Finally I could lay out the center of the quilt and see what I had: 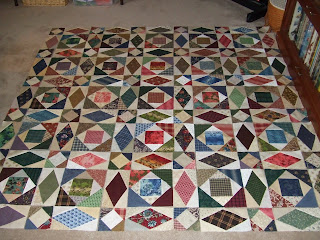 It's quite pretty.  HOWEVER - it's going to be a nightmare to construct.  First, because it was started on another sewing machine (which will affect your seam allowances no matter now careful you are - at least it will with me) and second because of that template cutting of the sashing diamonds and skinny triangles, which renders them slightly less accurate than I would have wished, not to mention what can happen when trying to mark seam allowance intersections and make the corners come together right.  There's some fudging to be done.  Perhaps a LOT of fudging to be done.  The thought makes me queasy.

I have joined two rows of sashing and one row of blocks and it's a headache, to be sure.  But I love the look of it so I will persevere.

Oh, yes - the edge has a border which consists of a row of blocks/sashing with the colors reversed - light diamonds with dark corners and single square in a square blocks with dark center and light corners.  It adds to the design but means that I have 54 more diamond sashing blocks to make later.  I wish they were foundation paper pieced, which is how I would attempt this design if I were ever to make another one.  The added accuracy is worth the trouble.

Posted by The Calico Quilter at 2:09 PM 6 comments:

A baby quilt for Mother's friend

The gentleman who owns the garage where my mother has her car serviced, a very nice man named Steve, is going to be a father in May.  Steve has some serious health issues, and Mom always asks about him and his family whenever she needs her car looked after.  He's been very good to her - where else have you seen the mechanic come and pick up your car, and then deliver it back to you when it's done?  Nowhere I've lived!

When she found out that Steve's wife was expecting we decided that they needed a baby quilt.  I had several made up in the drawer waiting for quilting so I photographed some possibilities, mailed them to her and we picked the favorite.  It came back from the longarm quilter yesterday and I started the binding very early this morning.  I just finished it: 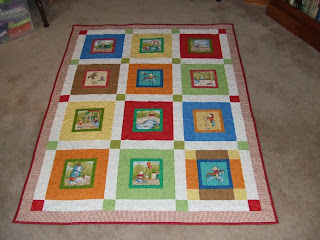 The little images are cartoons of baby animals playing in the park (bunnies, puppies and kittens, elephants and bears, mice, hedgehogs and even a crocodile or two! - dressed in children's clothes) and were clipped from a panel, framed with bright colors and set with sashing and striped borders.  The quilting is a delightful  pattern of ABCs surrounded by squiggles, a design which my amazing longarm quilter found for me..  I can ask for almost anything and she comes up with it. Where she gets them all I can't imagine.  Here's an example of the quilting: Now to call mom and get the particulars for the label - I don't know their last name!
Posted by The Calico Quilter at 10:31 AM No comments: