I can't decide which color to use in the alternate blocks of this Lady in the Lake variation. At first, I thought this gold/cream/blue tweedy checked print fabric was the right one to alternate with the gold and blue paisley, since the Carrie Nelson uses a brown tweedy print in her pattern. I searched everywhere and couldn't find a print like hers. FYI, her alternate solid blocks are gold paisley too: 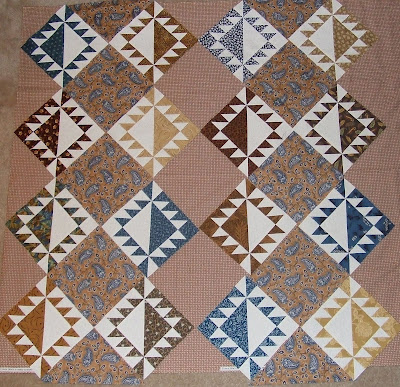 But then I tried this dark blue: 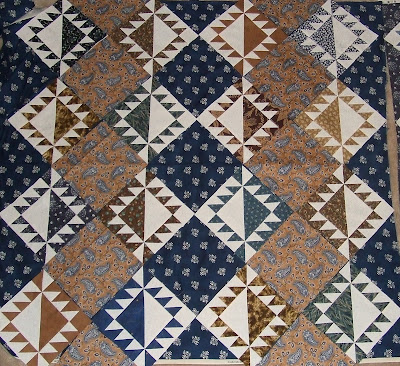 And then a slightly more muted blue with a bit more cream in the print: 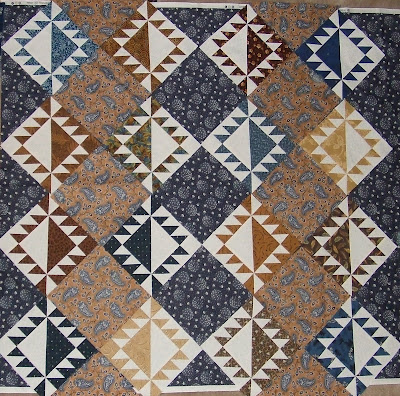 which I like but I don't have enough of it. If I want to use it I'll have to get online and find more.
ARGH! I can't decide. I'm going to try another navy blue with a smaller cream print that I have on order from Thousands of Bolts. I needed dark blues anyway, so I ordered three yards in case it works for this quilt.
What do you think? Husband likes the middle one. I like the color too but the print is a bit too aggressive beside that busy paisley.
Posted by The Calico Quilter at 1:36 PM 7 comments: 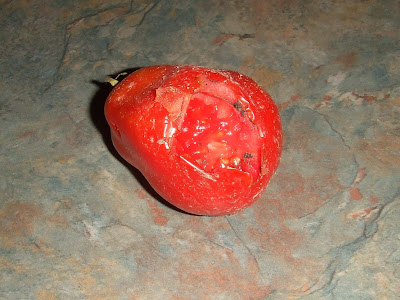 That's the first of my Roma tomatoes, which I was watching in anticipation of spaghetti sauce to come, until today I found it on the ground with a large bite taken out of it. Rabbit, chipmunk or squirrel? Who knows - the only thing that matters is that it wasn't me enjoying this tomato!
Posted by The Calico Quilter at 1:33 PM 1 comment: 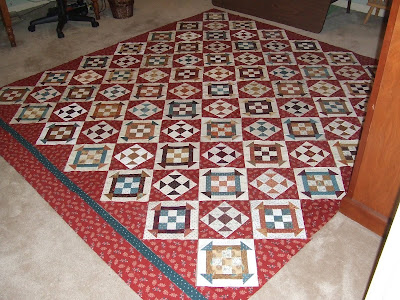 This one is called Scarlet Begonia. I just love Carrie Nelson's stuff. Of course, I enlarged it - 85 blocks now, to make it 94" square, which is the new standard size for us. I had the red fabric (Regency Collection III by Judie Rothermel) and I had bought a fat quarter bundle of Barbara Brackman Civil War repro which worked very nicely with it. Still haven't decided on the backing and binding.

I would like to find a blue/red stripe for the binding but haven't seen anything that would work in the meager offerings at my local Hancock's and Joann's. I don't like the selections in either store. Joann's fabrics are usually too bright and modern for my tastes, and Hancock's are just all over the map - all over except for the styles I like, it seems. I went out yesterday looking for shirtings because I had used up most of mine in this quilt and couldn't find a thing in either store. When I asked for shirtings at Joann's the lady led me to a table of tropical shirt prints - you know, parrots and tiki huts and such. Ahhhh, no.

Both local quilt shops are now gone - one closed and the other was blown away by the April tornadoes. I could drive about 25 miles up the interstate to another town with a quilt shop but haven't tried it yet. Perhaps this week I'll take a look when I go out to do other errands. It's time for another food donation to the local food bank and I want to buy several box fans to donate to the Salvation Army, which distributes them every summer to low income households without air conditioning.

It's difficult for us to understand how anyone could live in this town without the A/C. I know people do, but I feel very sorry for them when we get in one of these heat spells. Husband says that the summer heat actually makes him ill, and it's true. When our heat pump broke several years ago during a 100 degree stint, we had to buy a window A/C for the bedroom and he stayed in there for five days until the new unit was installed. If he tried to go out into the rest of the (very hot) house for any length of time it got him, but good. He's one of those people who don't perspire and his internal temperature just goes up and up until he's sick. Or, as his sister has done several times, keels over in a dead faint. I think I remember her saying that happened at an outdoor estate sale one summer, and at King's Island once.

I'm getting so much sewing done because it's been in the high 90's and I can't stand to step outside, so I sew all day. After dinner I run out and water everything; I might lose some of my new shrubs but I'm trying to preserve them. It takes a lot of water with this kind of temps and red clay soil. Hang on, azaleas, it will be fall someday. In the meantime, the tomatoes are growing - they are the only thing on the place that likes heat.

Well, Molly probably would like it a bit warmer inside - she sleeps under the quilt at night. A cat is never warm enough.
Posted by The Calico Quilter at 4:55 PM 3 comments: