I like birds. Always have. I have had pet birds (don't right now because of the feline queen of the house -- she's an indoor only cat and locking up one excitable heavy-on-the-hunting-instincts cat with a poor terrified caged bird 24/7 doesn't seem fair for either of them). So, I feed outdoor birds and create the all-birds-all-the-time channel outside the sliding door for the cat and myself. In our house, each window is a different cat-TV channel for her to watch. The chipmunk channel is out front. Danger-speeding-cars is on the bedroom window.

This bird-feeding stuff is great in theory but the suckers are eating me out of house and home. If I've let the feeders run out, the chickadees will sit in the top of the dogwoods and cuss me out while I fill them. Of course, the chipmunks and the gray squirrels are contributing to the speedy depletion of seeds, but the birds do plenty of damage. Especially the mourning doves. I must have 20,000 living in my trees alone. And the goofy things can't find a better place to nest than the grapevine wreaths on the front and back porches. I had three nests this year. But that's another post.

Anyway, all the birds in bird-dom are out back gorging on free seeds. Well, they're seed-eaters, that's the plan. But along come the woodpeckers, and that's where I get cranky. These are bug-eating birds, darn it. So why are they eating my expensive black oil sunflower seeds? Because they're lazy, that's why. Nature loves a mooching opportunity. And not just on the feeders. I had a red-headed woodpecker wolf down half a suet cake in one sitting. But what can I do?

For now, I just suffer the cost and keep filling the feeders. But, the more I feed, the pushier they get. This morning, I looked out the bedroom window to see a downy woodpecker clinging to the side of the window and industriously pecking on my brick house. Was this a protest action? A couple of the feeders are empty. I better get out there before the natives get restless.
Posted by The Calico Quilter at 5:35 PM No comments:

And why is this blog called "It's the cat's house"? 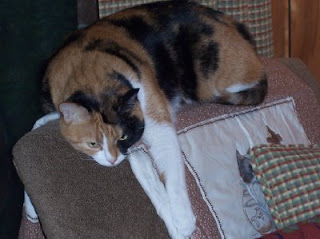 So now you know. Meet the queen of all she surveys, her royal highness, hunter of crickets, the master moocher.
Posted by The Calico Quilter at 12:01 PM 1 comment:

Just cleaned up the kitchen, again, after dinner (Sisyphus and that rock have nothing on me - nothing more inevitable and repetitive than washing dishes) and am contemplating the success of the last meal. Win some, lose some.

First off, although you can get some great recipes from America's Test Kitchen (ATK) on PBS, don't be seduced by that public television imprimatur into thinking that all their recipes are going to be healthy. We're talking butter and cream in serious rotation here. I don't know if they're worried about their cholesterol levels, but brother, they should be.

The recipes looked promising. Scalloped potatoes, how can you mess that up? Four pounds of russets, heavy cream, onions, garlic, cheese. What's not to love? Well, the onions and the garlic were NOT GOOD IDEAS. They hijacked the dish and carried it to a place were the potatoes didn't have a chance. And all that cream? Not enough Tums in the western hemisphere tonight for the way I feel.

I got seduced by a new recipe's charms again. Nothing wrong with the way I make scalloped potatoes. Been making them that way for 40 years. They're good. But I read cookbooks like other people read novels, and sometimes I fall for their siren's song. Christopher Kimball sure looked like he enjoyed them on the ATK video. But, it's like my Mom says, every time they take a bite on these cooking shows it's like they never had food before. I'm still not convinced that ATK isn't getting a kickback from the garlic grower's association. They put the darned stuff in everything.

Now for the success: They have a mean recipe for pie crust and I just had a piece of absolutely grand apple pie. The crust has, believe me, sour cream in it. It also has 16 tablespoons of butter, cold, cut into cubes. That's TWO STICKS, people! Good grief, why wouldn't it be good? I hope Vermont has adequate ambulance service; Kimball is going to need it if he keeps cooking this way. Anyway, with half Granny Smith apples for texture and half Gala for sweetness (didn't have Golden Delicious in the house) precooked to soften them and immerse them in cinnamon and sugar, that was some good eats.

I have to tell you, that smooth-top electric range irritates the crap out of me sometimes. Cleaning that thing is half my after-supper work. You can't just wash the darned thing, oh no, you have to buy special ceramic range top cleaner, and you'd better buy it, because for some reason almost nothing else (except maybe a sharp paring knife, scraping gently -- but I didn't say that) is going to get boiled-over pasta or splattered and burned-on tomato sauce off the ceramic surface. And the paper towels -- I go to Sam's Club and buy the nine roll packages now because I run through them like water. I didn't buy three rolls of paper towels a year before this range came into my kitchen. The only way to use that ceramic cleaner is to dump a glob of it on the range top and start scrubbing with the paper towels, changing them frequently. You don't need to buy the expensive ones, the cheaper and more abrasive the better. Burned on potato starch does not give up easily.

Of course, the only other option here would have been to buy the old-fashioned coil eye ranges. This benighted place doesn't have natural gas service. I would give something critical to get a gas stove. I learned to cook on them and electric ranges make me crazy. You can't just set the burner to a temperature. You sort of choose a temperature continuum. Suppose you adjust the knob to about 350 degrees. The heating coil is going to cycle, don't you know, so it's actually more like 350-370-360-340-320-310-330-350-370-340 and so on. On/off/on/off/on/off/on. This gets especially critical when you want to get a pot of soup barely simmering. The temperature fluctuates so much it becomes almost impossible.