I KNOW that I have been far too indecisive on this Quiltville mystery color selection thing.  You don't have to say it.  But I still feel in some way that I'm not quite there.  Oh, I love the colors I had settled on : 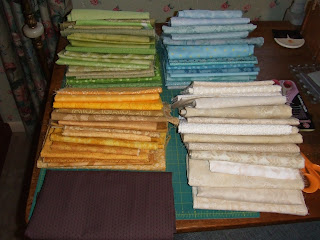 But there is a lot of gold there and it's very strong and while I like it, I used so much of it in the last mystery, Orca Bay.  So I was wondering if the blue and green would be enough to keep all the attention away from the gold.

So, this morning I started playing in my stash.  First I substituted the black on white prints for thee creams, like Bonnie is using: 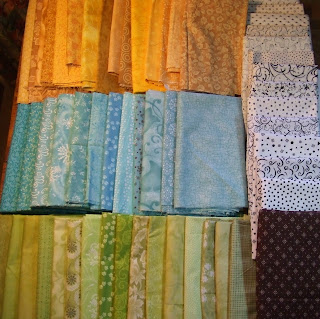 And, I kind of like it.  It gives the group a little more movement.  So even though I've used a truckload of shirtings recently I might go with that instead of the cream tone on tones.

Then, since I just ordered some fabrics from a cheap web source and threw in some purples because I had absolutely none of them, I made this grouping in Bonnie's selected colors, and it's pretty nice! 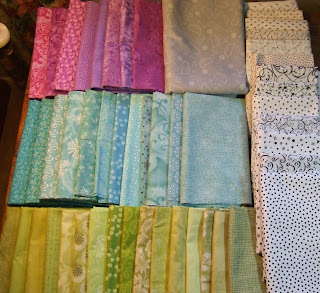 The gray might be little light, but it's what I have.  I have another much darker almost charcoal one too but that's probably too dark.

Then, my heart still yearning for a brown and pink quilt, I made a grouping around a striped piece that I found that would be the binding someday for that quilt.  It has a bit of purple in the stripes, so I used this group and put in gray for the constant, since that's in the stripes too.  I could use either the light or dark gray, I guess.  I added the creams for the background. 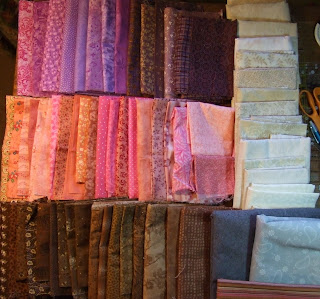 And actually, that looks a lot more like me!  You can see a bit of the stripe in the bottom of the picture;  here's a better one: 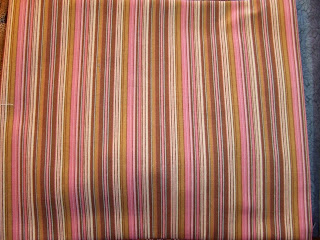 I could even fudge a bit and use a lighter blue for the constant instead of the gray with this stripe as an inspiration.

I'm going to have to put some real thought into this!  To say I'm confused is an understatement.  Don't get me wrong, I love my Orca Bay, I just don't want to make another screamin' gold quilt.
Posted by The Calico Quilter at 9:35 AM

I really like your third choice best. It has a nice range of values which will really perk up your quilt!
Lurking Linda