It's becoming a fall tradition. . .

At the same intersection as last year, no less.  Let me explain.

On Sunday afternoon I drove down to the Rite Aid to pick up my prescription.  On the way back, I got into the left turn lane on Gunbarrel Rd to get back onto East Brainerd Rd, which is how I get back home.  The light gave me a left turn arrow and I proceeded to turn onto East Brainerd.  East Brainerd is a four lane road with two turn lanes in the center.  It's a very busy road which is why I wait until I get a left turn arrow instead of trying to cross the traffic during a gap on a regular green light, which is practically impossible.  Anyway, just as I had turned into the inner lane on E. Brainerd, the truck that was sitting across the intersection from me in the right turn lane, turned and veered into my lane, sideswiping my new car.  Yep, the car that I bought in August.  ARRRRRGH!

I motioned for her to pull into a parking lot just past the intersection and called the police so I could file an accident report.  She called her brother, the owner of her vehicle because it turns she was driving her brother's Dodge Ram 1500 pickup truck - a very ratty, beat up truck.  I had to look a bit to see where the contact point was on that truck.  On my car it was all too apparent.

After the police came they took statements and both she and I said that we had turn arrows.  Now, he knew that wasn't possible.  He looked at our vehicles and from the contact points he could see that she had turned wide and hit me.  So he started talking about how if you give false information on a police report it is a felony, and she started sniffling and admitted she had done a a right turn on a red light.  She was trying to spin it like that's what she had said all along, which got her nowhere.  In that case, I had right of way and she was at fault, just like I knew.  The officer ticketed her for Failure to Yield and set a court date in January.  By this time she was bawling on her brother's shoulder - which she should have been, considering she was trying to lie on the report and was caught out.  If she's really smart she should just pay the fine and avoid the court date because it could only get worse for her.

So this week I've been getting estimates for fixing my car and arguing with insurance companies.  My insurance's claim center (who shall remain nameless, but brag endlessly in their commercials about their support of the client during claims processing - NOT) was not very diligent in pursuing the insurance company of the party at fault, and told me the other driver's insurance company "could not verify his  insurance".  With a policy number, policyholder name, VIN number and licence plate?  Really?  They were being stonewalled because the other party hadn't turned in the accident and my insurance company wasn't pushing back.  My company was pressuring me to file it under uninsured motorist, in which case I would be out a $500 deductible.  Not likely.

So on Thursday after I picked up the accident report (which, by the way, the claim center said could take up to six weeks for them to get!) I drove over to my agent's office, plunked myself down in the agent's chair and said basically that it was time for their "value add" in this process, so get on the phone to the other party's insurance company and get something done.  Which they did.

This morning the car rental company called me to start arrangements to get me a rental while my car is in the shop, which is strange because I won't even go to the adjuster for the estimate until Monday.  At least something is happening.

While I was waiting for the accident report to be released, I went to the Honda dealership and had the suspension checked out to make sure there wasn't any damage, since there was contact with the right front wheel, and got two estimates from body shops.  So if their adjuster tries to low ball me, I can pull those out and say "I don't think so".

Oh - and I found out at one of the body shops that they are constrained by agreement with my insurance company to repair instead of replace almost all the time so they would not pay for a new bumper cover even though mine has a hole in it, nor a new alloy wheel although mine is scuffed up and dinged something terrible - not to mention the fact that the car's 2 1/2 months old for pity's sake, and patched up, buffed out and Bondo'ed is definitely not my definition of returning the car to the state it was before the accident.  If I had been forced to have it fixed under my uninsured motorist coverage, that would have limited what my company would have paid, regardless of where I got it fixed, leaving me to cough up $1100 more to repair the car the right way, in addition to the deductible.  Meaning, that for a bill of about $2600 they would have given me a grand, tops.  (The noise you hear is the top of my head blowing off in absolute fury.)

We'll have to see how the other party's insurance company thinks it should be repaired.  This might be interesting.   .   .

Why is everything such a blooming hassle?

Given the state of my week, I needed to distract myself and finish some projects before Bonnie Hunter's mystery starts next week.  I got this little quilt assembled; don't know what I'll do with it, but it's cute: 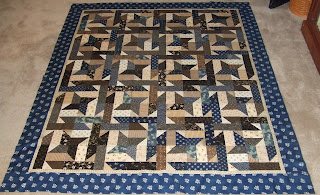 Right now I'm making a blocks for a Christmas quilt.  Yeah, probably won't use it this season, but maybe next year.   .   .
Posted by The Calico Quilter at 3:26 PM

Golly gosh! And we pay so much for the insurance. Sigh.

I almost was hit on Wednesday and then again on Thursday. What is really bad about this is that I was a pedestrian. On Wed, I was standing at the corner waiting for the walking man & green light. When it changed I took one step when a minivan turned left, and then the 2 cars behind her played follow the leader. Yes she was on her cell phone and yes, if I had been walking at my normal pace I would have been hit, she would have been rearended and then that car would have been rearended. Me I'm not sure I would have been alive. On Thursday, unfortunately at the same corner, other side of the street, the traffic came to a stop in one lane of the one way street and there was nobody in the other other lane. I had the walking man and green light again. This time I was half-way across the street when a little gal (who had her head turned talking to the baby) came speeding into (yes into) the intersection before she slammed on her brakes because she saw she had a red light. I don't believe she ever saw me until I slammed the hood of her car with my hand and made her jump. I held up my hand in the universal sign of 'stop' while I had to walk clear out into the intersection to get around her. From now on, I am crossing in the middle of the street on the one way so I can avoid the light. I think it will be safer.

I hope you weren't hurt - sometimes that doesn't show up until later. It almost seems like you have to have an "in" with a repair shop to keep everybody honest. Fortunately, I do - a friend of the family - and a repair shop that's approved by ALL the insurance companies. I've been in two accidents (not my fault) and I tell them where I want to take my car and they automatically OK it.

I love that quilt pattern of Bonnie's that you're doing. One of many on my bucket list....

I am sorry for your troubles! Boy they sure follow YOU around a lot. For the record, and in MY OWN WORDS Nationwide Insurance is NOT on your side when you have a 12 year old toothless Rottweiller. Nationwide said that ALL rotts are considered vicious & refused to renew my homeowners policy. Seriously, he was toothless - I pureed his dog food after soaking it in chicken broth for the last 2 years of his life. Never bit anyone. Was verified by our previous insurance and the neighborhood watch. Still they refused. Insurance is one of those EVILS. You can't live with out it and you're doomed if you do. I'm already taxed on my health insurance benifits, I guess my car & homeowners insurance is next? Right? I hope that it all works out for you.