I'm wrestling with a very strange decision right now. We've been debating buying a newer house and moving for several years, since we retired. We even talked with a builder in 2008 about a new development he was starting. As it turned out, we shied away from that because we thought he was getting over-extended, and it was a good decision. The builder went bankrupt and the four houses he had started, along with the land for the development, went to the bank.

That bank still owns two of the houses which are pretty much complete, but sold the other two houses and the rest of the land to another builder. The bank's two houses are done on the inside but need everything outside: final grade on the lot, landscaping, sod, driveway, sidewalks, gutters. The bank has listed the two houses on MLS, even though they can't get a habitability permit now because the road has not been installed in the development (which will be done by the other builder that bought the rest of the land) and the sewer and water lines need to be backflushed and connected, which won't be done until the road is done. We were told that at least a hundred people had inquired about the houses but were scared away by the unknowns: when will the city services be available, what will be built on the rest of the land adjacent to these houses, etc. The up-side to the decision is that the houses are listed at about 60% of what they would have sold for had they been completed as originally planned, and are still well under actual value even though without the planned amenities from the original development they wouldn't be worth that much now. 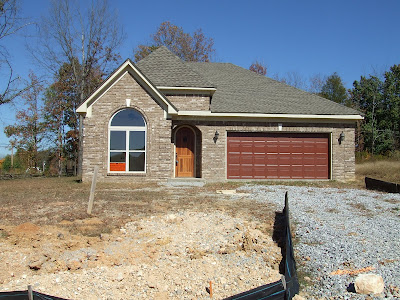 It's like a completed house sitting in the middle of a construction site. Since it's the first house on the street, on the corner of the main road, it is somewhat separated from the rest of the development and may not be as affected by what else is built as the other houses further up the street will be.

The inside is very cool, by the way. The kitchen is to die for - plenty of cherry cabinets, granite, the works. It doesn't have appliances yet but the realtor said to specify what we wanted in the contract and the bank would install them. There are build-ins in the living room, a sunroom, nice large baths, the works.

So our dilemma is this: this house is a good fit for what we have to have in a new home - slab construction with no steps, roomy, good use of space, well designed and constructed, attractive, small yard. But the downsides are almost too much to consider: Will the bank accept a contract that specifies that they must complete all the remaining work on the lot and house? How much of a pain will it be to get that work done correctly? When will the new builder put in the road (it's been delayed three or four times already this year)? How long will it take for the final city inspections and the habitability permit to be issued? What will be built on the rest of the land - will those houses affect the value of the ones already built? Could the builder put up apartments or something else instead (that's completely possible but not as likely)?

And - very important - will the new builder know what he's doing with respect to water control and drainage or will we have to worry about that too? That's a biggie because on our last house we had water issues in the basement when it rained hard due to the bad runoff control in the subdivision. This house is the first one on the road, and the land slopes uphill slightly from the main road to the back of the development. The original builder was very good at runoff control and we wouldn't have had a concern if he was still in the picture, but this area has become infamous in my eyes for builders that don't have a clue how to handle grading lots to avoid water issues. We have seen damp crawlspaces and basements and water problems everywhere we've looked.

That's a lot of issues to grapple with. Add to it the whole "Do we want another free-standing house with yard issues or should we just buy a condo and not have to take care of the outside?" and I'm in a complete tizzy. I'm good with problems where you solve for an answer and get THE answer - like math - but these fuzzy decisions completely stymie me.

Posted by The Calico Quilter at 7:42 AM

If you are retirement age, it seems like this would not be something you'd want to take on! My personal opinion is that there are way too many unknowns here to make an intelligent decision, but if you are bored and want stress in your life....

Seriously, I'd opt for something else or give serious consideration to a condo!

I kinda agree with BJ above. The yard work is one of the first things we cannot do, in our Senior Years. The unknowns are stressful - again -- difficult to deal with at our age, and with "age related" illnesses that WILL start cropping up, how would you SELL it if you change your mind, and the unknown property issues were STILL to be solved. But, it IS a pretty house.

It takes me longer and longer to 'do' my work, and my DH doesn't do any, and he's only 70. I'm lucky to be wanting to sew - I sure don't want yard work any more.

Cost for a condo? Yes, more, but you know, you cannot take it with you, and if you try to save it, the nursing home will most likely get it, at enormous rates.

1. We went condo (inside is enough & we know it.)
2. banks are not in the market to own houses - so they mightaccept any reasonable offer.
3. Seriously, that is "new" construction in your area? We are plagued by McMansions. People buy houses not unlike the one shown & put as much house as they can make fit in its place. One in a friends neighborhood completely blocked out the sun from another house.
4. Is that area zoned for apartments?

...I would have to seriously consider all the work involved in moving...
the house has some nice "pros"...
but the "unknowns" could become a real issue...
my small city lot & 1100+ sq ft house seem a lot to deal with...
not to mention, actually moving & getting the outside as you want it...
I wouldn't do it... but there's only me to consider...

That looks like a really nice house...but all the unknowns!!! If it were me, I would put the kitchen to die for in the house I was in. I am still waiting for that in my own house. Someday....

Well, I think this is one of those things that you can do alot of thinking about, and as you're an ex engineer I'd actually expect you to be an excellent decision maker as you think logically. I'd suggest you and DH make a weighted list of what you both want from your retirement home, then add them together so you get a score for joint factors and you've got a clear idea of what you both think is important.

If the house still is a reasonable fit against those criteria, then I think you're beginning to reach a decision. The problems you mention aren't insurmountable if you're willing to put some time and effort in - if you aren't then a condo or a completed construction is the way to go.

I'd probably use something like a Gant Chart or Microsoft Project to do a critical path analysis for the house and see how that looks. Also would you be able to stay in your own house until the build is complete?

Finally I think there's a lot of sense in moving before you absolutely HAVE to if you see what I mean. It puts you ina position of strength and you can take your time getting it absolutely right rather than being rushed.

And of course what does Molly think? Can you have a cat in a condo?