Well, SOMEBODY has some sense. . .

I went to the insurance adjuster for the other party involved in my little crash last Sunday and I was happily surprised that they didn't quibble, didn't low-ball and didn't argue - just wrote an estimate for all new replacement parts to repair my car that was well in line with the other independent estimate for new parts.  Whew.  What a relief.  I may get a check by the end of the week.

Perhaps the body shop won't be very busy between the holidays and I can get this fixed and over with before I visit Mom sometime the first part of December.  We don't try to go home Christmas, after having to fight one too many snowstorms in the past.  Husband doesn't make the trip anyway and I couldn't leave him alone here on a holiday, so I go see Mom between Thanksgiving and Christmas before the weather turns.  A few years ago, however, they got a snow around the 6th of December while I was there, so you can't tell.  And there is often worse weather going across Jellico Mountain than in the valleys - it snowed on top of the mountain the weekend after Halloween one year.

I basically try to avoid the whole "driving in the snow" scenario, even when I had an all wheel drive car.  I could become one of those "snowbird" people if I lived further north, like my husband's uncle who had a house in Ohio but wintered in Florida.  As he got older he quit going north entirely, an altogether sensible concept.  A major deterrent to moving back near family has always been the colder winters, which we both detest.

On the quilty front I'm trying to complete a quilt top using Moda's Merry Medley collection for a Christmas themed quilt, which will of course not be done for this holiday season.  It's based on a pattern from Animas Quilts, although on a 2" grid instead of 1 1/2", mostly because I was using charm packs and that was the least waste way to do it.  I wanted to get as many existing projects out of the way as possible before Bonnie Hunter's mystery starts Friday and this is the last one I can fit in.

Finished it!  Here's a horrible picture - it was night and the light was terrible. 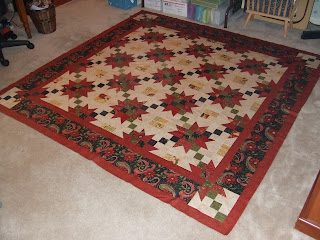 Posted by The Calico Quilter at 12:39 PM

Oooooh, it's almost time to start the mystery! Made your final decisions? I'm writing you from the frozen north, Edmonton, Alberta, Canada. And it's getting colder and colder, darker and darker. I HATE this time of year. I teach quilting twice a week at night and I hate going out and driving in the snow and the dark. Sigh. I'll think of you in warmer areas! Have a happy wait.
Lurking Linda

Are you sure? With you rfairly regular car accidents, maybe moving home (even with the cold) is just what you need...

Says the gals who wouldn't move home if she were paid to do it!