I think I've come up with a border idea for these blocks: 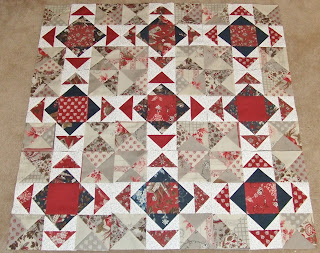 While sewing them (I have half done so far, 18 of 36) I thought about a way to do a positive/negative effect in the border.  I have a lot of a red print and a navy print, and more of the white on white used for the backgrounds so I fiddled around in EQ and came up with: 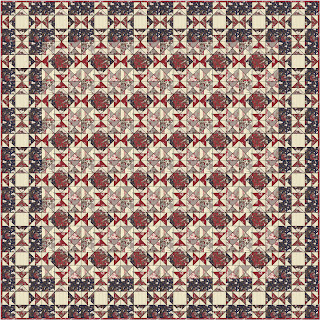 If I had more greys like in the hourglass blocks left over I could have changed the color of the flying geese in the border blocks too and made it a more accurately positive/negative, but I will have to use what I have available.  I like it and hubby likes it, so I guess that's all the people who need to be pleased, but I would like to hear opinions.

Sharp eyed readers might remember this from the spring: 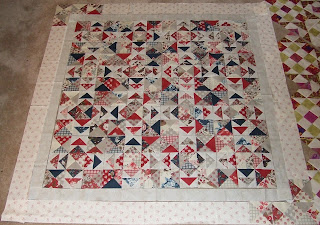 I made this small quilt using a couple of charm packs and scraps from my stash an always thought that it would have worked better if I could have controlled color placement better.  Working with what was in the charm packs it wasn't possible, but later I found a cheap fat quarter bundle and decided to revisit Panier de Fleurs.  Can't have too much French General fabric, in my opinion.
Posted by The Calico Quilter at 5:12 PM