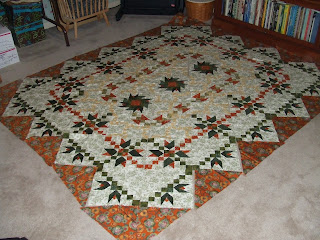 This is how it's going to be.  The designers were of course, right - it does't need any more borders.  I guess I have a propensity to take everything one step too far.

I'll start working on assembling the blocks after the electrician leaves - replacing ballasts in the fluorescent lights in both bathrooms.  It'll be nice to get rid of the flick-flick-hum-hum that they've started.  And then hopefully there will be no more plumbing problems and electrical fixes and flooring issues and wall repairs to be done - at least for a little while - until the garage interior is repainted after New Year's.

Addendum (11/2/12):
No sewing today but a nice trip to Hancock's where I purchased some additional fabric for Bonnie Hunter's mystery, which makes me finally, finally satisfied with the color selection and ready for the first step.

When the electrician removed the panel on the fluorescent light to get to the ballast he found that the case of the ballast was so hot that he couldn't touch it and had to put on a heavy glove to be able to handle it.  Not good  And the insulation on some of the wires was cooked and flaking off, leaving bare wire right next to the ballast.  Even worse.  So glad I got that done.  The ballasts are inside the light structure so no idea that they were in that bad a state - the lights just flickered and were slow to start.  What a relief.

I think I'm just about caught up on the house issues for a while.  That's enough expense and misery for now, until after Christmas when I can get the painters back to paint the inside of the garage.  It won't take long and I will have the worst part of that job - pulling everything down from the shelves and hooks and moving all that stuff out of the way.
Posted by The Calico Quilter at 10:07 AM

I like this. I used to overwork watercolors and then the painting would turn into a mucky mess.

I just love the colors that you chose for this quilt! It is exquisite!