Like a good little obsessive-compulsive, as soon as I finished step one of the Quiltville mystery, I went casting about for a project that I could work on between steps.  Although I had several groups of blocks completed and packed away, I didn't want to get into joining rows and assembling a quilt top because I didn't want to clutter up the floor with a block layout.  I needed a project piecing blocks that I could pack away easily when the next mystery step was released on Friday.  So, I decided to start making the blocks for a Blue Ridge Beauty from Bonnie Hunter's "Leaders and Enders" book.  This quilt uses 6" blocks made from two HSTs and two four patches.
Arranged and colored in different ways it makes several traditional patterns, including Jacob's Ladder.  This quilt will need about 200 6" blocks.  This was a quilt that I had planned to make for some time since I found a beautiful blue paisley at Joann's.  The paisley and a single neutral would be used for the HSTs and the four patch colors and neutrals would be scrappy.  Joann's also had a matching striped fabric that will be the border.
So I jumped into piecing and already have made 400 four patches.  After dinner I made 40 HSTs and assembled 20 blocks to test out the pattern.  Here is the sample: 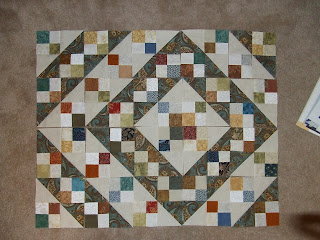 I think it's going to be gorgeous (of course, I'm a little biased!).
Posted by The Calico Quilter at 9:09 PM

I don't think you are biased at all. This is going to be a gorgeous quilt.