I have something more to consider about my Quiltmaker's Newsletter mystery quilt assembly.  Since my colors differ from those chosen by the magazine, I have some leeway how I lay out the blocks in the outer border.  Initially, I thought I would do it like this, which is more like the magazine's choice: 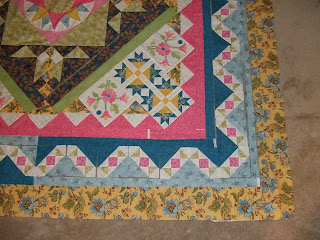 with the darker blue on the inside.  But I tried it the other way round: 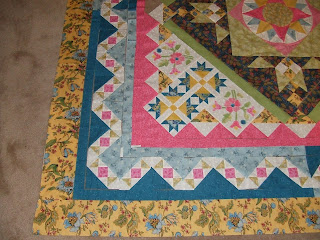 and I like that too.  It separates the dark pink and the dark blue and points up the border somehow.  On the other hand, I like how the light blue relates to the blues in the outer border in the first example.  I'll have to assemble the top out to that border and then decide.  In the meantime I can join the strips for all the borders and finish the center medallion, which is growing on me, by the way.  If I had known that the dark blue would be the background for the blocks surrounding the compass medallion I would have chosen a different fabric, because I think it kind of sticks out.  But that's one of those "don't cry over spilt milk" situations because I don't have the inclination to remake those blocks. ﻿
Posted by The Calico Quilter at 9:08 AM

my choice would be #2---since you are asking, LOL. Lovely quilt so far.

Wow! It sure is a beautiful quilt! I'd be happy if some of my mystery quilts turned out like that! I like the second picture too. Sort of a fading of the medallion into the border... And the light blue still brings out the blue in the border.

Gosh! What a hard choice. I would put the darker color on the outside. I'm not very daring though! :-)