What I'm making with what I found

I found a stack of fat quarters and yardage of Pat Sloan's line "Old Blooms" from 2003 when I straightened the stash closet. I had a plan how to use it but just couldn't commit. It remained in my "someday" pile until a few days ago, when I decided that the Miss Rosie pattern "Whirligig" would suit it far better. This is rather daunting design at first glance but it goes together like a snap. Just lots and lots of flying geese and hourglass blocks. The progress so far: 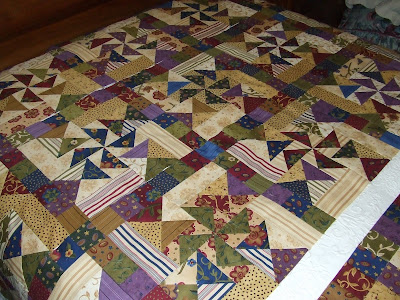 It will have a border of hourglass blocks and an outer 6" border of a large green print from the collection, making it a huge 92" square, just right for two people and a fat cat. Quiltshops.com helped me find some of a purple print from this line at a great $5.00 a yard to make the backing, relieving me of the problem of searching for a coordinating backing. See the purple print with stars and oval gold shapes with maroon edges that sort of look either like buttons or pizzas? LOL That's it. I also have a stripe (the green and maroon one used as background in some of the blocks) for the binding - just love striped or plaid bias binding.

Meanwhile, the pattern that was going to be made from this fabric, "Uptown Girl", is now on the back burner. I auditioned the "Silk Road" line from Benartex in it using EQ but I'm not convinced. Some fat quarters and yardage of "Silk Road" came home with me from the LQS last month, and it is almost too luxurious to cut into. It has the most fabulous silky feel and the colors and designs are luscious. Sometimes you run into fabric that you just want to fondle! I have another idea brewing in EQ that might be good for the "Silk Road" fabric, but I need to find a coordinating ivory tone-on-tone that is worthy of being mixed with the Benartex. It might be hard!

I've been joining the rows this morning while my husband rests up from his dentist trip yesterday. He had a molar pulled which was a real trial. One of the roots was curved and needed excavating from the bone to be extracted. It was bad. I'm sure he feels like a mule kicked him in the jaw, and he had stitches in his gums which are still aching. Hopefully it will be better soon.

But now, I need to put down the sewing and starting cooking, some nice soft chicken and noodles that will be easy for him to eat at dinner.
Posted by The Calico Quilter at 3:13 PM

Ow! Complete empathy with your husband. Extractions are not funny!!! I love your comment about finding a fabric which is good enough to go with the Benartex--I LOVE their fabrics and agree, it's really hard to use them to their fullest potential! You'll find something I'm sure. I do love your whirligig quilt.
Lurking Linda

Oh no! Poor hubby. I love that quilt, the design and colors are gorgeous.