I think I've found the absolute worst clothing altering job you can do - removing the waistband from a pair of pants, fitting the waist and replacing it. I still say I would rather make something from scratch than alter it.

I've been losing weight recently due to the diabetes, my diet changes and my stepped-up exercise program. Right now I'm between two sizes, which is really aggravating. Eight or ten pounds or so I will be back in some clothes from 10 years ago but for now I'm buying a few things and making alterations as needed. Some of the things I had to alter were several pairs of Lands End and L.L. Bean khakis, which I live in most of the year.
Each had its own problem. The L.L. Bean pants were too tall in the rise. You know the situation, where you slip on the pants and the waistband is hovering slightly below your bra band? That doesn't seem to happen too often anymore, but these were "classic fit" in the world's worst "Mom jeans" fashion. So I removed the waistband completely, lowered the top line and refitted them with darts and taking in the side seams. Then, back on with the waistband and all the belt loops. It sounds so simple but let me tell you, picking out seams from factory-made clothing is a total pain. It took two hours to do one pair of pants. I spent the evening doing both pairs.
Then it was on to the Lands End pants, which have their own problem. I had bought the ones with elastic in the back waistband because pants that fit my tush are always too big in the waist, but these were a whole different category. I swear, you could get two people in the waist of those khakis! So I removed the front waistband, tailored and darted the front, and sewed them all back together this morning. It was definitely easier than last night's job, but not a picnic.
So at least I have a few pair of pants that mostly fit while the treadmill does its magic. I'm using the pants from 10 years ago as a measuring stick. First it was - ooh, can't even put them on. Then - well, they're on but not zipping. Then - I can zip them but I can't breathe! Right now, they're close, very close. Some people would even wear them as they are, but I can't see myself in tight pants. Not at my age!
Meanwhile, I'm working on some 3" blocks using the pattern from Bonnie Hunter's latest Quiltmaker "Addicted to Scraps" column and a charm pack of Moda's "Harvest Home". They are cute, if a little tedious. 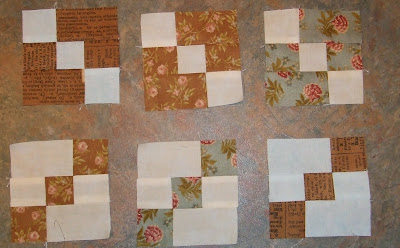 Not even really sure how they will be arranged, but once I get all 72 made we'll hit the design wall and see what comes out.
Posted by The Calico Quilter at 8:44 AM

I absolutely luv luv luv your blocks! Great fabric combinations, great blocks. They look fun. Those 72 blocks are going to be a blllasst to play with on the design wall.

Alteration of clothing? I support the local small business for that but I can't really comment on this I guess since I've nothing nearly as wonderful to be proud of as you. Loss of weight is fantastic dear friend. Absolutely fantastic.

I have to laugh because I've never had the short-waist problem. I know we've had this conversation before, but you make it sound so funny! So proud of you for losing the weight.