I've finished the Quiltville mystery. Here's a picture before the borders were added (I know, there's a block oriented wrong! I fixed it.): 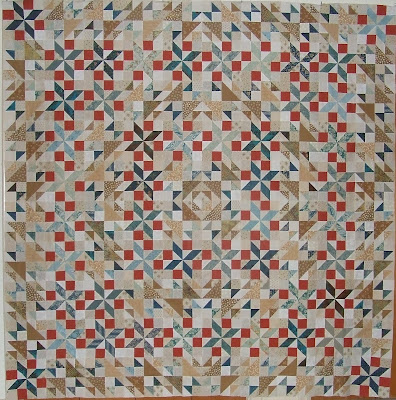 And here's a close-up of a corner after the pieced borders were added: 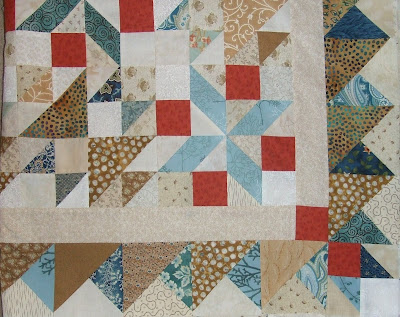 2392 pieces. Whew!
Now I'm piecing a backing (like it wasn't enough work) of one hundred 10 1/2" squares of all the blues, golds and neutrals (ran out of orange, but it will be the binding) and used EQ6 to lay out the colors. Much easier than crawling around on the floor! I made the picture of the quilt before borders by tacking it to the closet door frames with push pins. I had to stand at the other end of the room to get the whole quilt in the picture. Now that the border is added, it's too big to photograph, at least inside the house.

I'm very happy with how it turned out, and I like my alternate arrangement. But, one group member did an interesting change to tie the colors of the two blocks together and used blue, green and red in her quilt. I liked it so much that I'm going to make a small quilt half scale. Half scale means the red squares will finish at 1", and the outer border will be 2" wide. It will be small and fiddle-y work, but will be really pretty in a jewel-like kind of way. 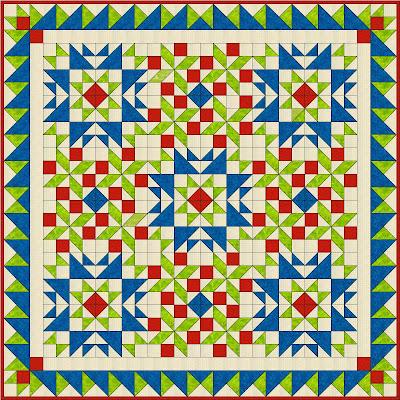 Those little red and blue centers really add to the design. If I had seen this before committing to my layout, I might have done this too. Caroline Van Maele of Brussels designed this change and made the quilt that has inspired me to attempt this miniature. Thank you very much for the idea, Caroline!
Posted by The Calico Quilter at 5:05 PM

That has turned out lovely! I have been tempted to start one, but have resisted since, right now, my time is at a premium. I've saved the instructions so I can start one at my leisure.

I absolutely LUV the use of fabrics. The way they show up is nothing short of delicious. I'm serious. This is really something to see. I love it!!! Congratulations on a grand finish. Celebratory Hugs, *karendianne.

WOW ! That is simply beautiful! You did a wonderful job & I think the orange is perfect.

It is a BEAUTY! I love the softness of your colors, and how nicely they all play together. You've hit the jackpot with this treasure! The border is every BETTER than the center. 8-))

very nice - I am so impressed with how quickly you got that top (including the pieced border) done!

On second look - I REALLY like the cream background with tan blocks. (I am so happy to have pin-pointed what exactly I liked.)