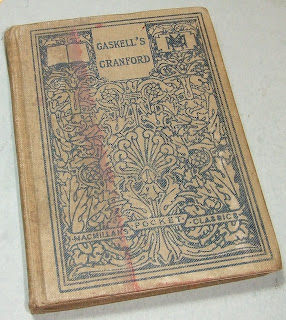 I love all books, but I especially love old books, so when I saw this little gem at a library fundraiser sale, I had to have it. It cost all of $2.00. I know it's not in the best of shape; the cover is discolored, the binding is starting to loosen and the pages have yellowed. However, it has such an aura of mystery!

Where has it been since it was printed in July of 1908? The information available is tantalizing. It is part of the set of Macmillan's Pocket American and English Classics, the list of which is printed inside the frontispiece, and it cost 25 cents when new. It's a small thing, about 4 x 6 inches, and around 200 pages. It's tiny enough to have ridden around in a gentleman's coat pocket or a lady's handbag, ready to read during a spare moment. It was the equivalent to our paperback books. The name J. H. Valley is inscribed in a very old-fashioned hand inside the cover. Was that the original owner?

As precious as it is, I might have passed it by as I did so many other old and intriguing books, except it was a copy of "Cranford", Elizabeth Gaskell's novel chronicling the trials, tribulations and triumphs in the lives of the women in a small English village in 1842, which I have been meaning to read since I saw an excellent BBC miniseries adaptation last year. Since Cranford is a short novel, the miniseries used parts of two other Gaskell novels, "My Lady Ludlow" and "Mr. Harrison's Confessions" to build the story arc. The casting, writing, cinematography and acting are all magnificent, as I have come to expect from BBC productions. It's available on Netfix, so look it up if you want to be enchanted and whisked away to the mid-19th century.
Posted by The Calico Quilter at 8:05 PM

Lovely old book. I like books like this too. I like to have them sitting on my coffee table for others to look at and admire. Hugs, Linda

I absolutely love old books too. I have found several in the 1/2 price book store, of all places!