No visitors to the live trap in my crawlspace yet, but I know that I have at least one chipmunk still under the house. More wire chewing, although this time I caught it before more than the insulation was damaged. Drastic actions might be called for. 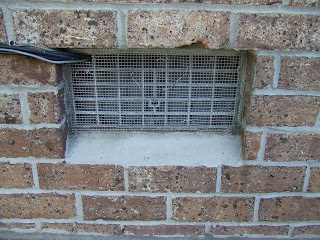 This is all happening because at that one vent, the flap inside it couldn't be closed fully due to wires entering the crawlspace. The poor rodent can see daylight around the edges, prompting him to try to chew his way out. If the live trap is not successful, I might have to resort to more lethal methods.
In the meantime, I made the miserable crawl-and-slither under the house all the way to the far end (and that's about 80 feet) to put electrical tape on the telephone wire, DSL wire and cable coax that had been nibbled, and notched the vent flap so it would close completely around the wires. Then I packed the corners of the vent full of steel wool (chew that, you little varmint!) and taped the dickens out of the wires. If he can't see a possible exit path around the wire he should leave them alone.
I just hope he gets hungry enough to check out the peanut butter and gets caught in the live trap. I really don't want to kill him, just boot him out of the crawlspace. Once they're all out, I think they can't get back inside. Just to head off any habitual behavior, I wrapped the wires outside the vent in steel wool too. What a mess this has been!
Posted by The Calico Quilter at 9:43 PM

Good luck with that!

Ooooh - I don't think I could crawl UNDER the house - oh my fear, panic, out-of-control feeling is taking over me right now, just trying to imagine! Great job, woman!

Whoa! I have to admire your ability to do that slither thing under your house! I'm like Elaine...it panics me just to think about it.