A trip to the bookstore

I left the house all civic-minded this morning to go and vote early. My state has had early voting for several years and it was handy when I was working. I always thought of it as a great advantage. Then I got to the mall and saw the line at the temporary polling location. There were probably 150 people there, and the line wasn't moving very much. I had used this early voting location for congressional races in the past, and it seemed to be one of the worst-managed and slowest-moving ones in the city. So, I decided that I didn't have over two hours to stand in line today and would vote on Election day. On the way out of the mall I stopped by the cut-price bookstore (you know, the ones with the huge tables of books that look so tantalizing but you can't find anything in the piles!) and decided I would give them five minutes and see what I could unearth. Well, it was worth the stop.

I found the Edmund White biography of Marcel Proust that I had always wanted to get, for $3.00 in hardback, no less. And a very nice traditional applique pattern book by the AQS for $7.99.

And this little gem for 99 cents: 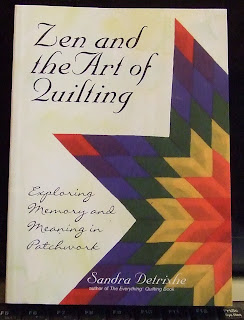 I couldn't resist the title. Even if it's complete drivel, it's worth 99 cents of entertainment.

And oh, yes, I went out later to the other early voting location at the local recreation center and voted.
Posted by The Calico Quilter at 4:16 PM