The perils of miniaturization 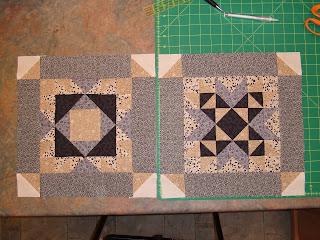 Sometimes when you have an idea, the full ramifications aren't initially clear. The "Somewhere in Time" BOM from BlockCentral is really pretty and each block has a fair share of intricacy. The 9" center of each block is different, with a built-in sashing and corner squares to bring it to 13 inches. The block is originally 18", but I am sewing each block 2/3 size of the original to make a lap quilt. Shrinking the block was not a problem. I drew a scale diagram of the small block and figured all the cuts required. But, on the paper, it just didn't hit me how small some of the little pieces would be and how many there would be in a 9" x 9" square finished area. The February block had 57 pieces just in the center design. There's enough fabric tucked into the 1/4" seam allowances to cut an entire other block! It makes for a bulky little thing to work on.

All in all, though, I'm happy with my fabric choices and smaller blocks. I am working on the gray/tan/black color version, and while I admit to some trepidation at first, by the time the second block was completed, I was hooked. It is soooo different from what I usually do.

However, I decided to make a full-size version in a blue color scheme instead of the rust/green one that I showed in the previous post. This apple can't fall too far from the tree, and I love blue.
Posted by The Calico Quilter at 8:54 AM

I think the colors are stunning. Very classic colors for what looks like a traditional quilt. This is going to be another beauty!