I'm busily laying out my Arnold's Attic fabric quilt top this morning and am indulging in one of those games quilters play when they are trying to decide the configuration of scrappy blocks.  It's called "Are these fabrics too close together?"

Don't tell me you haven't done this too.

You've sorted the blocks into stacks for each row, assuring that the main colors are distributed evenly between the stacks, and then you start to lay them out on the floor (or, lucky you, on your design wall) in rows, carefully assuring that a repeated color or pattern is not too close to its brother block, stepping back repeatedly to see that the colors are evenly dispersed throughout the quilt.  And when all the blocks are placed in position, you see one that won't work.  Say, a red block is too close to another red block.  Or that large green floral is in a block right next to another block with that same floral.  So you move one of the offending blocks.

There's only one solution to this situation.

It's a scrap quilt.  In the great cosmic scheme of things it's highly likely it won't impact the look of the quilt.  And it's almost impossible to create a layout that evenly distributed all colors/fabrics throughout the quilt every time.

And guess what?  No one else will see it.

So make your best shot at the layout, step back, take a picture if you want because it's always easier to objectively evaluate a layout in a photo, and then - start sewing.  Perfect isn't gonna happen, but if you obsessively stay there, rearranging blocks, nothing is gonna happen.

So you sew, girl.

Here is the layout so far.  Borders to follow.  If the hot weasther holds I might have this finished by the end of the weekend, because I'm sure not going to go out in the yard when it's this miserable.  Thanks for the input on the border question, because I've made up my mind.  I'll show you later.﻿ 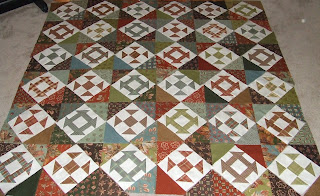 Posted by The Calico Quilter at 9:49 AM

Sometimes I put the blue polka dot nect to the green polka dot - so that one can easily see the similarities & differences in the "same" prints.

& When I did my cat charm quilt, I sometimes used the same "cat wearing a bow tie on green & red" while other times I used "Cat with a golf club on green & cat with a tennis racket on red"

Either to show the similarities or to show how many images were on the print - when I self limited myself to one image per piece of fabric.

Hah! I was going to suggest something but you've already made the decision - good! Every time Ithink I have the perfect suggestion, someone else has a better one that looks gorgeous! Perhaps they look gorgeous because they are DONE?

When I'm really stumped on a border, I will repeat some element in the quilt to sorta blend in style, but not overwhelm. Works well a LOT of time. And I pay attention to sizes of elements as well.

Oh my goodness. I can spend hours playing "move the blocks around"! :-)