Time to update the living room

In the last few months we reached the point where we looked around the living room and said "Something's gotta happen." Not that things were in shambles, but we had kept it the same for at least 10 years and both of us were bored. His chair was the first priority, because it had become uncomfortable, so we found and bought the leather armchair I posted about several days ago. Then we started talked about the rest of the furniture.

The matching couch was looking tired and getting kind of squishy, and didn't go with his new chair. We had debated ordering a chair to match it but figured the new chair would far outlive the existing couch and besides, we had found a good deal on an in-stock recliner in that dark brown leather. So the couch had to go. A little sleuthing (and some phenominal luck) put me in a local furniture store during a Columbus Day 25% off sale, and I found a nice comfortable small-scale Flexsteel sofa. We ordered it with custom upholstery for a great price. We had looked at sofas all over town and they were so BIG. Our house just isn't that large, at least the living room isn't, and it doesn't have a lot of open wall space that isn't taken up by the ginormous television. The sofa has to go under the window on a wall that also contains his comfy chair in the corner, positioned so he can see the television. So the sofa can't be 90" long. The one we ordered is only 79" and that's rare.

The rug, drapes and striped arm chairs are staying, so that left the end tables and coffee table, which we've had for over 30 years. Nice stuff, cherry, well made, but we're tired of them and wanted smaller scale end tables. One evening, surfing through Overstock.com, I found the perfect solution: 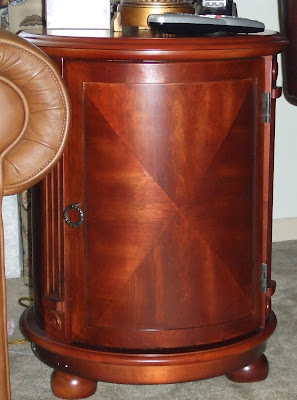 Lovely little cherry drum tables with interesting veneer and two shelves behind the door to stash remotes and stuff. They arrived yesterday. The next step is new table lamps for them because he detests the ones we have, but surely that won't be hard.

Still can't find a coffee table that's not as big as a bed, but I'm working on it.
Posted by The Calico Quilter at 10:56 AM

...homedecorators online has every style of furniture, not too pricey, but most you have to assemble yourself[it's not hard...]
I went with a loveseat instead of a sofa the last time... it was just the right size... happy re-decorating !

It's always a positive sign when you BOTH decide to do some decorating! Good for you.

I agree about BIG furniture - some of it is ridiculous - my home also is not large.

And when you get one room done, then the others call out to you, don't they? Enjoy!

Oh yay! There's something so wonderful about doing over a room. I too suffer from big furniture overload. In the SF Bay area most recent homes are McMansions that can fit a living room set the size of Montana. But our tiny living room just can't. Took forever to find a sofa that wasn't a Winebago.