A little too bucolic for me

This is my neighbor's vegetable garden. These are my neighbor's chickens. FYI, I don't live in the country. I'm inside the city limits with a population of about 175,000, and nearly half a million in the metro area. 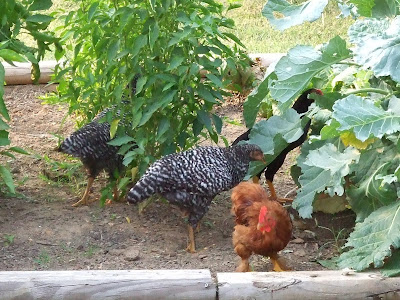 He has rabbits, too. I'm not thrilled about this.

And as I was picking tomatoes I was stung twice on the forehead by a wasp. My day has not been good.

ADDENDUM: There is at least one rooster in the bunch that I didn't see before. He was crowing this morning. Oh, drat. And this is what the city says about it:

"It shall be unlawful for any person to keep or possess swine, goats, chickens or roosters within the City on property other than agriculturally zoned land, unless such animals are kept on a track of land containing five or more contiguous acres." This is happening on a 3/8 acre lot zoned single family residential.

The only question is, do I want to cause a stink about this? Stuff like this between neighbors is a minefield. I guess I'll listen to the rooster for a while. I don't think the old lady next door is going to be as restrained if she hears them, so this might be interesting. Hopefully, they'll get tired of the chickens soon. They've had the rabbits for years, though, and I can't for the life of me see why. They just sit in their pen and the children don't even pet them. Poor bunnies.
Posted by The Calico Quilter at 8:27 PM

Chickens are nasty. Dirty. Only thing they are good for is being looked at or eaten.

Maybe you should check your city ordinances. They might NOT be allowed. Females, maybe, but not roosters - might violate a noise ordinance or something????

...if the chickens haven't been around too long, predators or cold weather may take care of your issues... bunnies are another issue altogether... I know these "farm animals"would not be allowed inside my city limits... sorry about the wasps... one got under my shirt once & I was miserable for days... hope you're OK...:P