What I've been up to

Well, I haven't been blogging or doing much on the computer recently. I've had two doctor appointments. My husband has had two appointments too, and a dentist appointment for an abscessed tooth (ouch). That's not out of the woods yet, but he's better.

Mostly, I've been sewing. All five of the quilt tops for my nephew's family are now complete. One is at the longarm quilter, but here are pictures of the other four, and some other pictures, too. Please excuse if the pictures look wonky, but I have to photograph large quilts hung across two closet doors in the bedroom and that makes them hang funny.
First is the one for my nephew. It's so different from what I normally make that I had to warm up to it during the sewing, but now I think it's kind of neat. This quilt is going to be called "It's All Right There In Black and White". It's about 75" x 87". The proper way to make this would have been to match all four white pieces as well as matching the four black pieces in each "windmill", but that would have entailed laying out the whole top somewhere and assembling the blocks as you go, row by row, to keep all the matching pieces together. That was just impossible because the only space large enough to lay it out would be our bed in the opposite end of the house from the sewing machine and I refused to run back and forth for every single block. So, I picked one black print and one white print for each block. I don't think the design suffers much. And I love the punch of lime green. The backing is supposed to be a stylized black and white spider chrysanthemum print, but I may hunt a lime green and white print instead. What do you think? 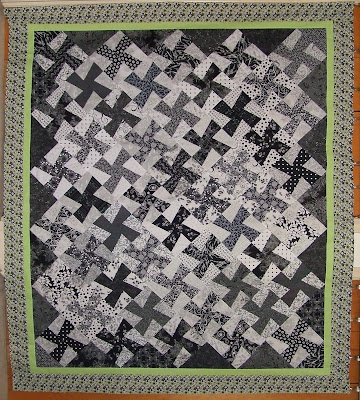 This one is for my 4 year old great nephew. It's 68" x 80". I didn't want to make a kid's quilt but instead something he could use for years. I thought a red white and blue color scheme would work well for a boy. It's big enough to use all the way through his teen years (unless he gets very tall - both his parents are tall, we'll have to see). I like to think of him taking it off to college with him. 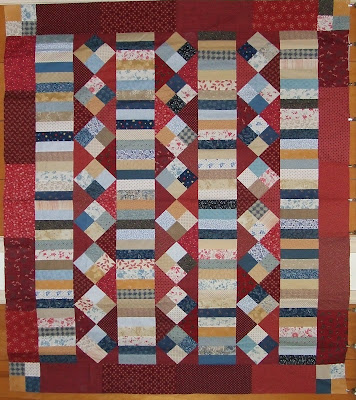 This one is for my nephew's wife, 75" square. It's all stash, I'm proud to say, and it made a nice dent in the stash closet. I like the colors. It's the "Little Red" pattern from the "Schnibbles Times Two" book. There's a batik version in the future for myself. 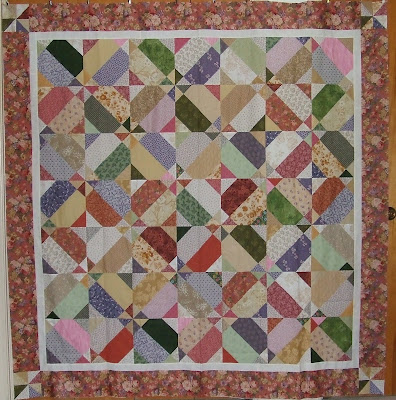 Then, I fell in love with the Moda "Fresh Cottons" line and used layer cakes to make my oldest great-niece's quilt, that's 78" square. It's from "Schnibbles Times Two" also. I've fallen in love with that book! This is very girly. She's turning 14 in a few weeks. Gee, I hope she's not gone Goth or something. 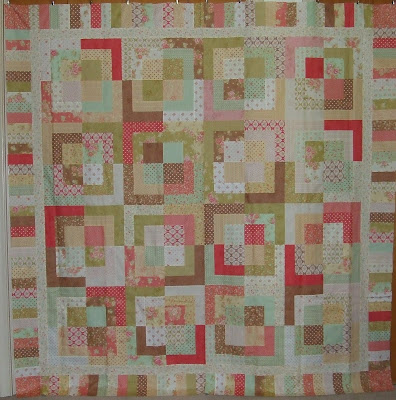 I'll have to post the picture of the other great-niece's quilt when it comes back from the quilter.
Now for a few I very selfishly made myself (like I need another bed-sized quilt!). This one came from the Schnibbles book too. I may not stop until I've made every quilt in the book. Love the colors and the feather quilting. I have the greatest longarm quilter. Go, Sherry! 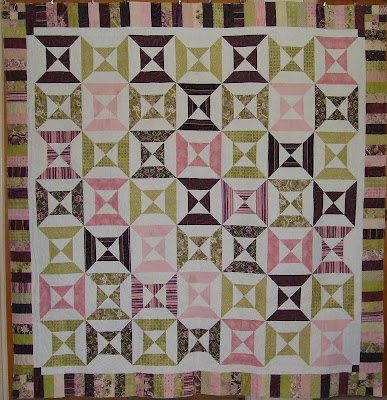 This one I showed before it was quilted. I want a bedroom in these colors someday. 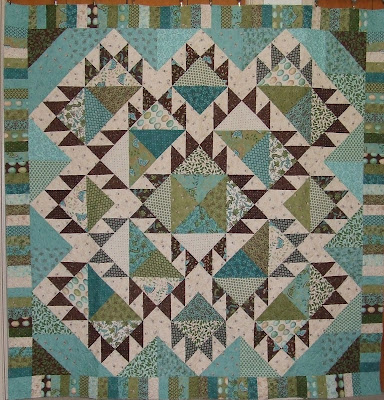 Those two need to be bound soon. Another mega-binding party is in the future, like I did last October, I guess.
And finally a little thing I just finished piecing. It's the same pattern as the blue quilt above, but just 36" inches square. 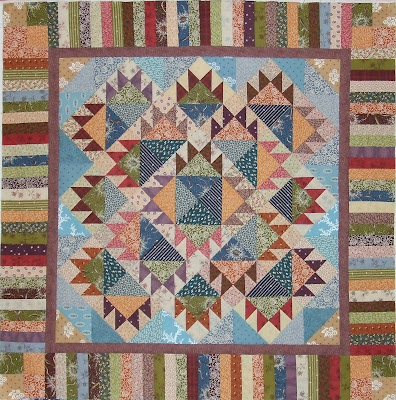 I have a blue and yellow basket quilt that just needs borders waiting on the design wall, but that stack of batiks is calling my name. Given the fact that I have no self-restraint, I'll probably start my version of "Little Red" this weekend.
Posted by The Calico Quilter at 11:10 AM

Wow, you HAVE been busy. Love that b&w&green one.

...hi Calico...hope all the medical stuff turns out OK... all your quilts are just lovely !... one of my friends made me a small quilt as a present recently... it's in the "Many Thanks M&CM" post... take care...

OMGosh! What a lovely array of quilts - guess that proves it - when you stay away from the computer, ua get things DONE! I especially love the 3rd one - I GOTTA do it!

I love every quilt here. The last one is my favorite, I think it is the colors that grabbed me. I understand why you love your schnibble's book so much!