Requiem for a good dog 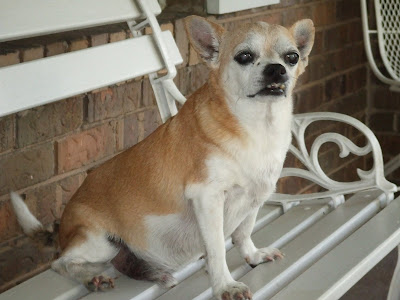 My neighbor has a little chihuahua named Pepe. He's purebred but not the best example of the breed. He's always been a little plump and has a crossbite that gives him a snaggletooth look. Despite his conformation faults, he is an excellent companion for this lady, who lost her husband about 11 years ago and now lives alone.

Her husband was the one who actually bought the dog from a neighbor who wasn't giving the little puppy very good care. He just couldn't stand to see the dog mistreated. As a result, the couple got a loyal pal. The poor thing grieved pitifully when his master died. After her husband's passing, Pepe became very attached to the lady, and shadows her every waking minute of her day.

Now, almost 14 years old, he is terribly spoiled and adored. But a few months ago Pepe started losing weight. Alarmed, she took him to the vet this week and found out the awful reason. Pepe is diabetic and very sick. He's almost blind from cataracts. His diabetes is so severe that it could not be controlled by oral medication. If he were to be treated it would be by insulin injections twice a day. My neighbor is in her upper 80's and lives alone; she is not sure if she would be able to do this by herself. She also worries about his quality of life and how he could live with his failing sight.

Now she faces the most horrible decision a pet owner can imagine. Pepe is on a strict diet for now, but his disease is not abated. He will probably lose the rest of his sight. His kidneys may fail. He has lived a wonderful life and has meant so much to her, but she must let him go. Soon, she must give him her last gesture of affection, a peaceful passing.

She didn't have a good photograph of him so I went over this evening to take a few pictures of Pepe so she will have a memento. Pensively, she said to me, "I lost my husband, I lost my sister, I lost my mother, and now I'm losing my dog." That tells everything about how important this little dog is to her, and how much company he has been.

WOW. Don't make me cry. I am VERY emotionally attached to MY fat dog. So I know how she feels. It took me 3 years to get 40 pounds off her. I love her & I can't imagine losing her.
I know the lady is 80 - but if Pepe has to be put to sleep - do you think maybe you could find her another older dog/companion for the shelter? Or rescue? Older dogs always seem to get left behind.

Ah, how sad...my heart goes out to her. Losing a pet is so hard but having to put one down is even harder. I know it's in their best interest and all that but....I will keep your friend in my thoughts and prayers...hugs, Linda

This decision is so difficult. I couldn't do it but I wish I could have... Or I wish someone would have made the decision for me... Your friend has given Pepe a wonderful life and vice versa! I hope she takes comfort in that.