I love the Kentucky Derby

I admit it, I'm a sucker for the Derby. I'm a Kentucky girl, born, raised and educated there. I spent the first 24 years of my life in Kentucky, the last six of those in Lexington, the epicenter of the whole horse-crazy state. They may hold the race in Louisville, but they breed the horses, train them, buy and sell them, and generally go ga-ga over them in Lexington. Lexington is where you can find free copies of "The Blood-Horse", a racing industry weekly magazine, in the lobby of the Holiday Inn.

My six years in Lexington solidified a mania for the Derby fostered in childhood by the ritual of watching the Derby on television every year, madly rooting for your favorite. I may not be a horsewoman (heck, I think I've only ridden a horse twice in my life) but that's not a requirement to be completely, ridiculously sappy about the Kentucky Derby. Everything about the race brings a big ol' lump to my throat. The beautiful twin spires of the Downs, the elegant, high-strung horses, the traditions, the crazy crowd in the infield, the hats - oh, the hats! 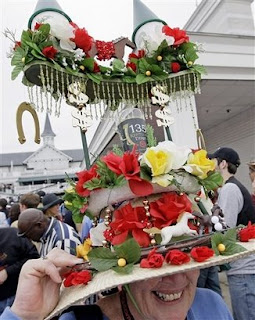 (This lady tried to get the whole of the Downs on one chapeau. I'm betting she had a neck-ache all day.)

I still get teary-eyed when they sing "My Old Kentucky Home". It's a song that's fused into my bones. We sang it every school year at the Spring Song Festival. I will know the words to my dying day. And even though the crowd at Churchill Downs is a bit snarky and less than respectful during the rendition before the race, it gets me every time. You know the point when the University of Louisville band crescendos and the melody swells at "Weep no more, my lady"? Yep, that's me, snuffling over in the corner of the couch.

The finish this year reduced me to a wreck, watching in a nail-biting frenzy as jockey Calvin Borel slid Mine that Bird through impossibly narrow gaps by the rail and then accelerated on the stretch, leaving the other high-priced wanna-be's in the dust (or, rather, mud). 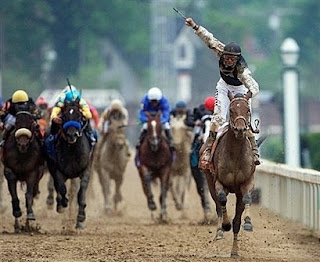 All the world loves an upset win by a longshot, and Borel and trainer Chip Woolley gave them one this year.

But, as much as the spectacle, and the sport, and the sheer raucous party, it's the tradition behind it all that's the real draw. They've been doing this for 135 years. There are minor changes every year, to be sure, personalities come and go, corporate sponsorships become ever more intrusive (anybody else think that putting "VISA"on the back of the track personnel's jackets is tacky in the extreme?) but you can bet that the first Saturday in May all of the racing industry is in Louisville, sipping on a julep. And anyone who is anyone will be with them. Along with about a million college students in the infield, acting absolutely insane.

And, as a University of Kentucky alumna, along with all those college kids in the infield I can categorically tell you that the Derby isn't on the first Saturday in May, it's on the last weekend before finals.
Posted by The Calico Quilter at 7:48 PM

Oh rats! Was it today? I always watch those three races in the spring and I forgot today. Grrr...I'm not from Kentucky and I've only been there once (hopefully more) but even I tear up when everybody sings that song. It makes me wish I WAS from there. Thanks for a great post.

I don't know any thing about horses or racing. But, come the first Sat. in May I love to watch the excitement of those few minutes. All the before hype I can do without....just give me the race...and what a spectacular race that was!!!! Couln't believe what I was seeing coming so fast along the fence. WOW. Great show.