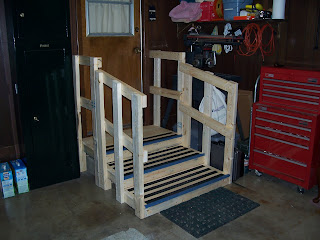 After I retired in 2007 I tackled some jobs around the house that had been waiting a long time. One of them was cleaning out and organizing the garage. I could show you pictures of that, too. I learned a lot of things from that task, one of which is that we own a lot of hammers. Never mind.

After the garage was cleaned and organized, I tackled the stair issue. There was one tall, narrow concrete step between the garage floor and the door to the kitchen, which is shown. There had never been a handrail. Now, I needed to construct a set of steps which were deeper and with a lower rise for my husband's use. I knew how stairs were usually constructed with a stringer, and I knew I probably couldn't do that. So I came up with three platforms on legs, each shorter than the one before by 4 3/4". The handrail supports would be an extension of the outside legs on the boxes.

This entailed carrying lumber home in my Subaru station wagon (I really need a truck) and becoming comfortable with the power miter saw I bought my husband for Christmas several years ago. This was a big deal because his radial arm saw always scared me to death. I'd use a circular saw or a jigsaw but not the radial arm saw, which he said was silly since it was actually easier to hurt yourself with the power hand tools.

So, armed with a power saw, a pile of lumber, about a million 2 1/2" self-tapping screws and a large bottle of wood glue, I began. I worked one Saturday until the battery pack on the cordless drill was dead. The next day, I put the whole thing together. The black stripes on the stair treads are non-slip strips, and the blue edges on the stairs are there because with all those stripes, it became difficult to look down and see the edge of the stair! I painted a blue strip on the edge of the stair treads because blue was what I had (left over from the shutters). Some day I will paint the whole staircase but for now, it works OK as is.

What you can't see well in the picture is the one warped, twisted 2 x 4, which was so crooked I didn't want to use it. Finally, I had to because I ran out of 2 x 4's. It's the handrail support on the second step, on the far side. It irritates me every time I walk up the stairs.

I'm not going to tag anyone, because most of the people reading this have probably already been tagged. So, if you want to play along, feel free.
Posted by The Calico Quilter at 7:40 PM

You continue to amaze me. Next time I'm going to tag you to make a list of "Things I Cannot Do"...lol.. I'm betting that's a short list! All kidding aside, I admire your many talents!

My gosh! I couldn't do that if my life depended on it. I'm afraid of saws, drills, and hammering hurts my arms. I'm not helpless, but that's something I never learned. Hooray for you!

Goodness, how very accomplished you are! Sewing is about the most energetic work that I do!