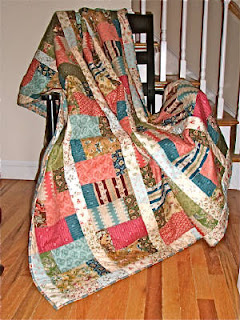 I started a new quilt today just for myself. Here's the pattern that's the basis; it's by SuzGuz Designs and is called Boston Commons. I'll be making it larger and adding a border. The fabric is Windham's "A Little Bird Told Me", which I fell in love with and finally had to track down on Ebay because the stores were sold out of the fat quarter bundle. I seldom copy anything directly, but I loved the colors.

On the home front, I walked over to the kitchen counter this evening about 8:00 pm and found a swarm of tiny black ants that weren't there at 7:00 pm when I cut my husband a piece of pie. Honest to goodness, they found a couple of pie crust crumbs on the cabinet and called a few thousand of their closest friends to join them in an hours' span. I have never had so much as one ant in this house in fifteen years. I suppose a queen ant set up her colony near or under my house and the first foraging party got lucky. Now I'll have to call the exterminator to spray all those noxious chemicals around. I pulled out the Black Flag can and routed them for the night, but they're out there.

I would write more this evening but the recurring joint pain I deal with has decided to put my left shoulder out of commission. (That's why I'm on the computer at 1 in the morning. No sleeping tonight. And no typing with two hands either.) So my luck is holding.

I'm expecting the swarm of locusts any day now.
Posted by The Calico Quilter at 1:23 AM

You know I feel your pain...those darn ants make me crazy!