Yesterday, I made a stop at my local quilt shop after taking my bungled quilting job back to the longarmer and stating my complaint. In summary, she refunded 1/3 of the cost of the quilting and apologized - a lot. Since it wasn't a top that I had a lot of hopes for in the beginning, I considered it a good resolution. (I made critical errors in selecting fabrics too close to the same value and by the time I realized it, too many log cabin blocks were made to just throw it out or modify it. So I completed it with a piano key border and had it quilted allover with a clamshell panto. It makes a good bedspread and I think I will alternate it with my white wholecloth quilted bedspread now and then. But I'm still incredibly embarassed by my goof.) 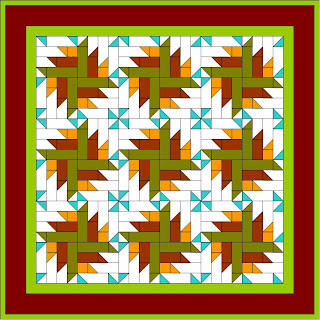 But, I was driving very close to my favorite quilt shop and thought I'd just drop in to see what was new. I DID NOT WANT TO BUY ANYTHING! Boy, famous last words. They have a little quilt in the window that I have been eyeing for months. It's made using the Moda Shangri La jelly rolls, and is just adorable. Well, yesterday it got to me. I had to make this pattern. It's basically a Delectable Mountains block with an added triangle at the corner that forms whirligigs when the blocks are set this way. I poked around and found a jelly roll of Moda "Folklorique", a yard of the large red print from that line, and an orange-y apricot small print also from Folklorique for the backing. Folklorique screams "summer" to me with the reds, apricots, lime greens and bright sky blues. I have been wanting to make a series of small quilts to hang in the hallway and change by the season. I think I have the start here.

Of course I didn't have my camera with me, so I rushed home and sketched the pattern as quickly as I could so I wouldn't forget how the blocks were set together. (My first try was a little messed up. I just now realized what I did and fixed it.) One of the best things about this little jewel is it's all strips and there's almost no bias! (The diamond log cabin made me slightly crazy so I had to put it away for a while. All those 60 degrees angles.......)

The jelly roll will make this go soooooo fast! As soon as I cut the strips to length and add white strips from some stash fabric , I will lay all the fixings on the table in the bedroom/computer room beside my new sewing machine and be ready to sew at a moment's notice. This is such a small project I can work on it in a small space and not make a dreadful mess. And I can join all the color strips/white strips at once and press en masse. It will be fun to have a simple project.

I know I said I was cutting out the splurges since we were talking about another house, but........I just had to!
Posted by The Calico Quilter at 11:25 AM

Hi - beautiful idea ... I love the colors, this would make a great Fall quilt!

Do you do your designing in EQ?

Thanks for you visit and the best wishes!

I am looking forward to seeing this in the flesh!

I love both of those fabrics. I am working on a quilt now using Shangri La. I really like the jelly rolls. The 2 1/2" strips makes projects go so much quicker. Cutting is my least favorite thing to do so anytime I can have strips already cut, that's ok with me....I can't wait to see the quilt. Hurry up! Hugs, Linda

Good for you for getting some money back...It's a shame you have to keep people honest but I'm glad they reimbursed you and you're satisfied. I'm glad it wasn't a quilt you loved! Hugs, Linda