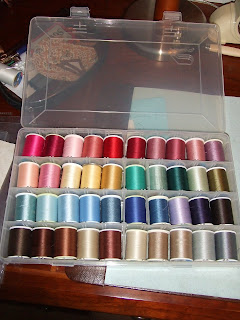 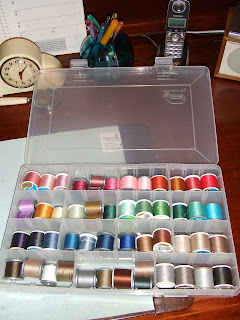 I've tried everything imaginable to store thread in a way that's visible, handy and orderly. A few weeks ago I was walking through a Lowe's hardware with my mother and saw these boxes. They have turned out to be the best option I have ever tried. You can see that the large spools fit perfectly into the molded tray. The smaller spools look sloppier but the box still functions well for them.

This isn't all my thread. The large cones are in a box along with ziploc bags of specialty thread like heavy duty rug thread and jeans thread (yes, J. P. Coats markets that weird orange thread used on jeans). I have another bag of hand quilting thread, which I don't have very much of - that will probably change as I try my hand at it more.

Some of this thread must date from the late 1970's. See that teal thread on the small gold-colored spool? That was from a suit I made for my mother. The large spools of pale yellow and pale green are from chintz drapes made for my bedroom and the guest room about 15 years ago. The little gray spools of Molnlycke thread were bought to match colors used in my in-process Baltimore Album blocks. It's fine for hand sewing but I've never owned a sewing machine that could tolerate it. There's a lot of pinks because I went through a Moda/Robyn Pandolph phase, and a lot of different beiges and taupes. There's almost no red, or orange, but there is a spool of peach. (Yikes, what did I make that was peach?)

There are so many kinds and weight of thread out there, and I really don't know anything about them. I have three kinds of thread - Coats, Molnlycke and the large cones (forgotten the brand name). Someday I need to catch up my education on thread.
Posted by The Calico Quilter at 8:02 PM

I'm sooooo with you! Thread storage (& bobbin storage) are the bane of our existence! Could you please go back to Lowes and find for me to store my cones of thread please! I'll buy, you shop.

I went so far as to buy one of these for all my thread. It matches my sewing cabinet and slides right underneath. And with my handy-dandy label maker I've labeled the drawers with what it contains. I have a lot of thread. That includes speciality threads from Kreinik and Superior and YLI. I have perle cottons and ribbon floss plus large cones of threads. I've got 30, 40, 50 and 60 weight thread. O my.

Morah, no luck with thread cone storage. I'm still looking for storage boxes for those. I foraged the Lowe's and Walmart and none of the storage boxes were either tall enough to store the cones upright or had wide enough spaces to lay them on their side. I guess the shoebox will have to do! Anyone have a solution?